Commercially available contrast media are gas-filled microbubbles that are administered intravenously to the systemic circulation. Microbubbles have a high degree of echogenicity (the ability of an object to reflect ultrasound waves). ‘Left-sided’ contrast echocardiography uses these microbubbles to enhance the image quality of the left ventricular cavity. At the same time it can provide information about myocardial perfusion. Contrast echocardiography enhances the amplification of the echo signal of blood (better signal/noise ratio) and is used only in patients who have been unsuccessful without contrast (if there are two or more sections of LV myocardium are not able to judge). Contrast highlights the left ventricle cavity and strengthens the markings of the endocardial border, thereby improving accuracy in detection of regional wall motion abnormalities and assessment of intracavitary thrombus.

Microbubbles are not just passive reflectors but active generators of sound energy. This is a key feature of contrast imaging. The manner in which the bubbles behave is related to the degree that they are stimulated (i.e. the acoustic energy they are exposed to), this is defined by the Mechanical Index (MI) and, as a legal requirement, is always displayed on all ultrasound machines. A higher mechanical index means a larger bio-effect. 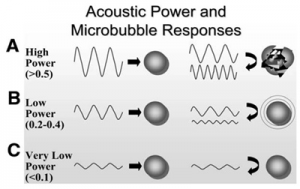 At low acoustic power (MI < 0.2), the acoustic response is considered as linear, as the microbubbles undergo oscillation with compression and rarefaction that are equal in amplitude and thus no special contrast enhanced signal is generated. Microbubbles act as strong scattering objects due to the difference in impedance between air and liquid, and the acoustic response is optimized at the resonant frequency of a microbubble. At intermediate acoustic power (MI between 0.2-0.5), non-linear oscillation occurs (bubbles undergo rarefaction that is greater than compression). Ultrasound waves are created at harmonics of the delivered frequency. The harmonic response frequencies are different from that of the incident wave (fundamental frequency). These contrast enhanced ultrasound signals are microbubble-specific. At high acoustic power (MI > 0.5), microbubble destruction begins with subsequent transient emission of high intensity signals that are very rich in non-linear components. Intermittent imaging becomes necessary to allow the capillaries to refill with further microbubbles. It should be noted that microbubble destruction occurs to some degree at all mechanical indices.

The use of ‘right sided’ contrast improves the detection of a PFO compared to PW color Doppler. Recent studies have shown that transthoracic echo contrast has a similar accuracy as compared to a transesophageal ultrasound. Right sided contrast consists out of a mixture of 8 ml physiological saline (0.9% NaCl) with 0.5-1.0 ml air and 0.5-1.0 ml aspirated blood. If no contrast crossing over the interatrial septum (IAS) is observed, a Valsalva manoeuvre can be applied to provoke right to left shunting through a possible PFO. This manoeuvre could improve the PFO detection. A contrast echo is to be performed in a AP4Ch or subcostale4Ch view. Firstly the contrast enters the right atrium, herafter the right ventricle and pulmonary branches. Due to its large size, the airbubbles do not cross the pulmonary vascular bed and will not enter the left atrium. In case of a PFO contrast bubbles can cross the IAS to the left atrium. However, the number of heart beats have to be counted. Contrast-bubbles in the LA within 3 cardiac cycles are considered to be the result of an intracardiac shunt. When it takes longer than three cardiac cycles it can suggests an intra-pulmonary shunt. The risk of contrast echo is very low, according to a study by the American Society of Echocardiography, there is about 0.06% chance of a side effect of contrast with the use of a saline solution.