Martin Mersenne (1588-1649) was the first to calculate the speed of sound, while the physicist Robert Boyle (1627-1691) first noted that a medium is necessary for sound to travel. A few decades later, Abbe Lazarro Spallanzi (1727-1799) demonstrated that bats use ultrasound for navigation through reflective echoes. In 1842, Christian Johann Doppler (1803-1853) stated that the pitch of sound varies as the source of the sound moves. In 1880, the brothers Pierre and Jacques Curie developed the piezoelectric crystal, enabling the first practical use of ultrasound. When a piezoelectric crystal is compressed, it produces an electrical charge. The British engineer Richardson demonstrated in 1912 that ultrasound can be used to detect submerged objects (sonar). During the first world war Paul Langevin was commissioned to develop a radar to detect enemy ships, and later, in 1929, Sokolov used the sonar to detect flaws in metal. The American engineer Floyd Firestone introduced ultrasound into the medical community, which was further developed by the Austrian neurologist Dussik in 1941, who succeeded in identifying the ventricles of the brain.

Clinical use of echocardiography

The German W.D. Keidel was the first to use ultrasound for examination of cardiac volumes in 1950. In 1953 Inge Edler and Hellmuth Hertz used a commercial ultrasonoscope borrowed from Siemens, to examine various cardiac valve pathologies, guided by autopsy findings. The essential part of their success was their ability to record of oscillations over time on a paper, which came to become known as M-mode echocardiography.

The introduction of 2-dimensional echocardiography revolutionized the imaging community. Dr. John J. Wild published the first ultrasound 2-D images of a resected stomach wall with malignancy. In 1954 he published together with Dr. H. D. Crawford and Dr. John Reid the ability (with reflected ultrasound of the breast) to distinguish between benign and malignant tumors. In collaboration with Dr Joyner at the Moore School of Electrical Engineering in Philadelphia, Reid developed a reflectoscope, which advanced the measurement of amplitude (A mode) to brightness (B-mode). Dr. Donald King showed that by the incorporation of brightness at the same time from multiple areas, images of organs can be made. His contribution was called the stop-action images and the technology remained popular until the linear array transducer was developed by Dr. Nicholas Bom and his colleagues. By using this linear scanner, Dr. Bom and colleagues produced accurate real-time images of the heart. These linear transducers are still used in non-cardiac ultrasound. In 1968, Dr. Somer, developed the first electronic phased array scanner, which further stimulated the use of ultrasound in clinical cardiology. 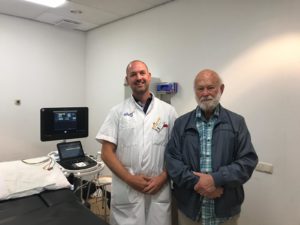 Attempts to incorporate the ultrasound images in 3-D format was first described in 1960. The first studies described an acquisition of a series of parallel scans of a human eye socket for reconstruction. Concerns about image quality, and the computing power necessary for data storage and reconstruction represented a major limitation for this application. Over a decade later, researchers obtained the first 3D ultrasound images of the heart. In early 1990 Von Ramm and colleagues developed the first real-time 3D (RT3D) echocardiographic scanner that was able to produce volumetric data of moving cardiac images. More recently, further improvements in design, construction and processing have resulted in the commercialization of RT3D echocardiography. 3D echocardiography has evolved rapidly, and different versions of RT3D imaging are currently available across platforms.