Each echocardiogram include an assessment of LV dimensions, describing wall thickness and function. Good measurements are essential and may have implications for therapy. LV dimensions must be measured in PLAX, end-diastolic and end-systolic and valves (MV and AOV) are closed. The measurement is situated in the basal part of the LV by the chordae.

Cardiac ejection fraction (EF) eyeballing may be the most accurate echocardiographic method for the assessment of left ventricular systolic function. Test yourself and learn by doing with this QUIZ. 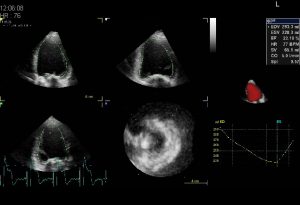